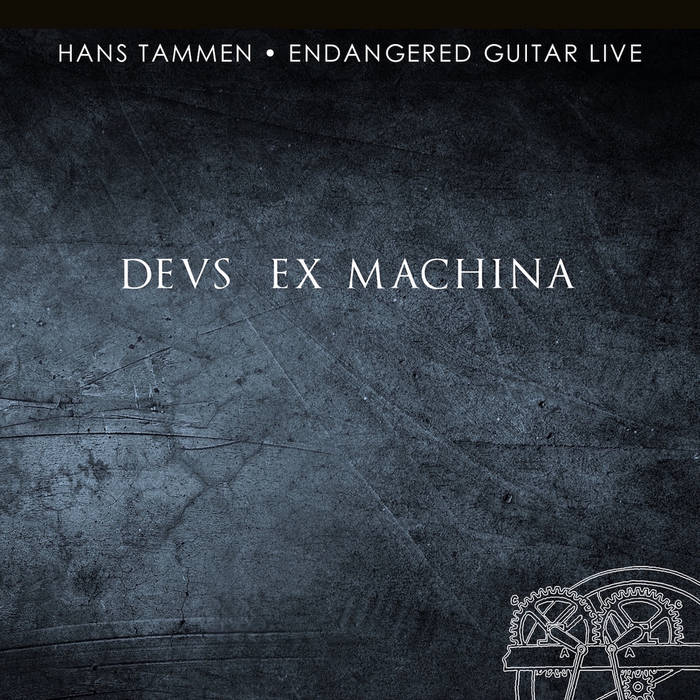 Deus Ex Machina is a device that allows a character to unexpectedly intervene in a troublesome situation, by being lowered onto the stage from a crane. It is a suitable term for a music project in which the performer constantly struggles with the built-in unpredictable behavior of the instrument - in this case, the Endangered Guitar, a hybrid interactive software that is designed to surprise the performer. Of course, here I am the actor myself, who is lowered onto the stage, improvising a way out of any conundrum the software presents (in one case, even as the computer crashed). This is less complicated as it sounds since I am also the author of this stage play, and I wouldn't let it go too far.

Plus, I am continuously performing with the Endangered Guitar since the year 2000, so I know how it reacts to my playing. It is a hybrid between a guitar and a computer, with software programmed in Max/MSP. Sounds are constantly recorded, and the information from the analysis of these sounds and my playing determines a wide range of timbral and rhythmic processes. From around 2004 on I programmed random elements into the machine, so that it surprises me on stage, and I do not settle into a routine. All pieces (except #6) are from this period, when the Endangered Guitar became an interactive instrument. Another reason for choosing these works is that these were new sonic universes - by then I had left behind the prepared guitar / noise formula that dominated my playing throughout the 90s, figured out which live sound processing approaches worked best, and developed a new rhythmic concept - eventually settling for Godfried Toussaint's Euclidean Rhythms.

As with other releases, I organized the music around several themes, with short interludes in between that allow your ears to relax. The whole CD is framed by an introductory piece that gives you an overview of the works, and a last one that allows the listener to unwind. Except for the introduction, each piece settles on a central idea.

All pieces (except #6) are from live performances recorded between 2004 and 2011. The majority is from performances around New York City. Three recordings were made in Europe, at Re-New Festival Copenhagen and Karbonmusik Zurich (#1, #12 and #13). The Attack Study (#6) is recorded at home in 2003, it is more focused than similar ideas I presented live on stage later. Here the software records the picking in random intervals up to 15 seconds, and with every stroke plays back the recorded sample from the start. Playing a rapid tremolo on the lowest string (the pulse you hear is the actual playing), the only thing the performer is supposed to do is to change the pick position constantly, in order to supply the buffer with different attack sounds (hence the title). Pieces #3, #9 and #18 make heavy use of the Euclidean Rhythm concept. Each "drum" sound is recorded on the fly from the guitar playing, and replayed according to the Euclidean approach. Since the concept distributes sounds evenly in time, it allows for lots of phase techniques, one of my favorite musical tools.

Information about the Endangered Guitar, videos and audio, texts, CD releases, multichannel projects, and more you can access from here: tammen.org/endangered-guitar/